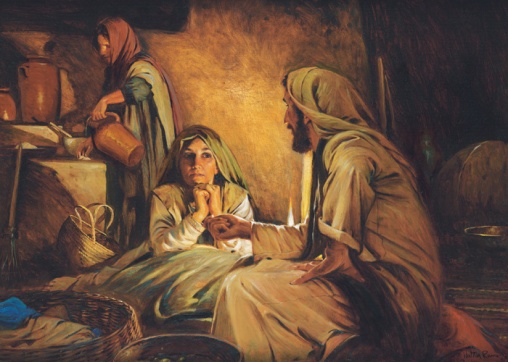 We read the biblical story of Mary and Martha like a public service announcement: Mary is good, Martha is bad. Martha is a sour puss, Mary is the guileless saint at Jesus’ feet. Be like Mary, not like Martha. (If you don’t know the story, read it real quick in Luke 10:38–42.)

Martha joins the biblical characters we often paint as unequivocally rotten: doubting Thomas, the prodigal son’s bitter older brother, Ruth’s unfaithful sister-in-law, and Jonah. We view these characters more like object lessons rather than folks who had bad days, made bad choices, behaved poorly, and then pulled themselves together, grew, learned, made better choices, and served God after their story leaves off in Scripture.

What if God intends for us to fill in some of the narrative with what we know about ourselves, others,—and Him?

The wonder of a book so holy and enduring as the Bible is that it features people like you and me. If we can forget the stereotypes and employ a little empathy and imagination, we’ll see how their full stories might have unfolded, and we might learn something new about how Christ can change us. (1)

For instance, the much maligned Martha has taught me some lessons I never heard in Sunday school.

Like Martha, I would have been the one bustling around, fussing, “Lord, do You not care that my sister has left me to serve alone? Tell her to help me.” But let’s be honest, I wouldn’t have mouthed off to the Messiah. Allowing my frustration to fester is more my game.

Ironically, I’m much more like Sarah. She also was busy serving when she overheard Jesus tell Abraham that she would have a son in her old age. Hearing the startling pronouncement, she giggled a bit under her breath. But when Jesus addressed her response, she denied it. “I did not laugh!”

But not Martha. No, Martha would fly at you with her complaint or judgment or, I imagine, anything else.

I read a quote recently that said,

“A person’s success in life can usually be measured by the number of uncomfortable conversations he or she is willing to have.”

Difficult conversations make me queasy. Whether I’m concerned about hurting someone’s feelings, upsetting a relationship, enduring the backlash of a response, or facing my own shortcomings, I don’t like bringing up hard topics. I’d rather lie or endure than face a problem head on.

But I’m learning, like Martha, to speak up when I’m hurt or concerned, to tell the truth when someone needs to hear it, to apologize when I’ve offended someone, to ask people hard questions. And that includes God. It’s surprisingly difficult to tell some things to a God who already knows everything. Admitting my failures or needs, talking to Him about the repressed issues that haunt me or the topics I don’t understand—my candor and questions don’t rile or rattle Him. And His response will always be exactly what I need to hear to help me grow closer to Him and others.

2. Christ speaks to us differently.

I like to think that Jesus’ repetition of Martha’s name is less a scold than a comfort. Maybe Jesus isn’t telling her to hang up her soup ladle, let the bread burn, and take a knee. I think He is pulling her out of her flurry before validating her concern by acknowledging all that she had to do. (“You are cumbered about by many things.”) And then he gently tells Martha to mind her own business and reminds her of the most important thing: Himself.

After Lazarus dies, while Mary grieves at home, Martha runs to meet Jesus and expresses her confidence in his ability to have healed Lazarus—if only He had shown up on time. This time, Jesus calms her by having her repeat what she believes about His power and divinity.

When Mary comes out to greet Jesus, she says almost the same thing Martha had said about Jesus’ tardiness, and she weeps. But unlike His conversation with Martha, Jesus doesn’t talk Mary out of her grief or make her recall the finer points of her faith.

Instead, He simply weeps with her.

Jesus responded to Mary and Martha differently because, as the Bible says, He loved them. And though He is the same righteous God to all, He speaks to us in the specific ways that will best reach us.

His Word is universal and unique to each of us, powerful and personal, sharp as a sword and sweet as a whisper to our soul.

3. Making time for the “necessary things” is an intentional act.

That first time Martha served Jesus, I wonder if she was trying to make the Pinterest-perfect feast when she could have called out for pita delivery. Maybe she was seeking praise or trying to uphold her reputation rather than sacrificing to spend time with Jesus. Scripture says she was distracted, but I also wonder if she wasn’t jealous of Mary’s choice to embrace “the good part”—sitting at Jesus’ feet.

Even if we choose not to act on it or value it, we know it sure enough. That unheeded knowledge often manifests itself in discontentment in our lives or jealousy of others. Caught up in our busyness, we look at someone else that seems lavished with time to sit and reflect or pray or read Scripture, and we say, “Must be nice. . . .”

All the while, we sabotage ourselves by choosing too many unnecessary distractions.

But I think this passage teaches us, among other things, the need to prepare to have time for the necessary things. Adjusting our schedule. Saying no to some things. Cutting back on some things. Doubling up on others. It’s an intentional act.

Perhaps we should ask, How can we simplify our lives to gain more time for the necessary things? What can we sacrifice? Maybe we can give up sleep by waking up earlier. Decorate less and buy fewer gifts at Christmas to focus on Christ’s birth. Whip up a smaller Sunday dinner to focus on rest and worship.

Jesus promises that when we sacrifice to spend time with Him, what we gain in His presence will not be taken away from us. It’s ours to keep, and we won’t regret it.

The final time we hear about Martha is when Jesus has stopped back by their house six days before Passover. The verse simply says, “And Martha served” (John 12:2). She sets out the dates and bread and pours the wine, all while Mary anoints Jesus’ feet with oil. The exceptional part of this account is that Martha doesn’t say a word!

As the aroma of incense wafted into the kitchen area, I imagine Martha slowed down to breathe in the sweetness, and then she carried on.

Perhaps her service had become an act of worship rather than a mere distraction.

I always heard that Martha’s story is a warning against busyness, but maybe it’s more a reminder about attitude and motivation in whatever we’re doing.

We often make the mistake of thinking that the dull motions of our routine cannot be part of our worship. We wait around for the perfect worship ambiance instead of praying while we chop the veggies or praising while we fold the clothes or listening to Scripture while we’re driving to work or meditating on God’s promises while we’re putting on our makeup.

I think by the end of her story, Martha accepted that she wasn’t the type of person to break a box of perfume over Jesus’ feet—but she could make the best meal and serve it to the Master as an act of worship. Because sometimes worship looks like sitting still at Jesus’ feet—but sometimes it looks like what you’re doing right now.

As you’re reading Scripture, meditate on the characters, on Christ’s response to the characters, and how that encounter might have changed the character’s life beyond what you read in the account. Which biblical characters do you most identify with and what have they taught you?

1. I loved the new perspective on Zacchaeus in Cole Smith’s Grace and Such blog post “Timely Obstacles.”

2. I found this article several months ago and appreciated the different view of Martha, “Martha, You Don’t Have to Be Mary.”

4 Replies to “More Like Martha: 4 Lessons I Never Heard in Sunday School”